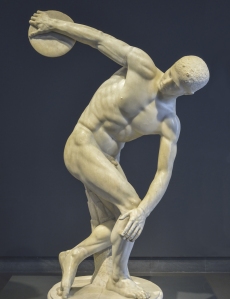 I was at the gym the other day running on a treadmill while watching the women’s marathon. Normally I run at a modest 10 kph pace which keeps up my fitness without killing me. But on this occasion I noticed I was running faster and needed to increase the treadmill speed. The strange thing was not feeling as if I was working harder than normal and that made me wonder why.

As I was cooling off, I realized that I had been following along in the foot steps of the marathon runners without consciously knowing that I was doing anything different or working harder. So simply by watching others perform my own performance improved.

Does this apply in the business world?

Absolutely. Finding and following in the footsteps of people we admire can have a very positive impact on our performance. We’ve all worked with colleagues who can show us how to better handle difficult people or go about a challenging project. So surround yourself with Olympic quality colleagues and watch your skills and abilities improve.

[Editor’s note: Peter seems to be suggesting he was running at the same pace as the women marathon runners and frankly he is deluding himself. The winner’s average pace was 17.58kph over 2 hours and 24 minutes. Somewhat faster than Peter has ever run in his life.]

How we make decisions can depend on a wide variety of things – how we feel at the time, what else is going on in our lives and, the granddaddy of them all, looking for information to confirm what we already believe (sometimes called Confirmation Bias, but I prefer to call this the “Ah-hah I told you so” bias).

There is another common error we make when taking mental shortcuts. We don’t like to consider things too rationally (because it hurts too much). Our brains like to seize on “facts” which we can then use to make decisions quickly without having to do a lot of thinking. But often these facts are not actually facts at all. Marketing companies understand this very well.

Look at ads for beauty products, anti-aging creams in particular. Appear younger, reduce this, enhance that and you too can look like this fabulous model who has been in professional make-up for 3 hours. But look at the small print and these ads will say something like “72% of 97 agree” (this is from a current ad by a French cosmetics company). So they did a test of 97 people and 72% agree so 66.24 people think it works. Hardly scientifically robust statistics but it’s the headline “facts” they want us to remember.

So politicians and marketers love to use these factoids, but it can also lead to poor decisions or perceptions in the real world as well. Recently I saw the following headline on the BBC website:-

“Google’s self-drive cars had to be stopped from crashing”

Wow those robot cars are going to kill us all, I’d never get in one! This might be a “factual” shortcut to believing that self-drive cars are four-wheeled terminators but is this a short-cut to a bad conclusion? Here are some facts about the number of times a human has had to intervene in California in 2015:-

Does that make it any clearer? Well it seems to confirm that our first response was correct. I mean look at how many times they almost had accidents – 2,460 times. Actually it is how may times there was  a human intervention not a potential accident, a subtle but important difference.  Once you add in the number of miles traveled in each test then things become a little clearer :-

So Googles cars have had to be stopped by human operators 13 times in 424,000 miles of driving. I wonder how often I had to slam on the brakes because I wasn’t paying attention or someone cut me up or pulled out without looking? Probably more that once every 32, 000 miles or so. I live on a small crowded island, so I am guessing I have to do this every 32 miles or even more. In fact, two of the incidents reported by Google were because of traffic cones and the other 11….well would there have been an accident? Who knows?

So perhaps Google’s self-driving cars aren’t so scary. In fact it is estimated that humans have 4.1 crashes per million miles in the US (estimated because minor accidents are not always reported to the authorities). Google are running at a lot more than that (30 per million miles) so they have a ways to go. But I am pretty sure humans are not going to be wiped out by terminator cars.

This decision short-cut is unhelpfully called the Availability Heuristic, not exactly a catchy or intuitive name. So I prefer to call it the Schwartzeneggar Shortcut.

Postscript: One of the case studies I use in training is Tesla Motors, the US all electric premium car company. I test drove their Tesla Model S recently during which I used their autopilot feature where the Terminator…sorry the car, did the driving. It is very unsettling to start with but after a while you get used to it. I suspect that in 20 years time I will enjoy a drive where I can sit back, relax and have a glass of wine while the car does the driving.

Seth Godin’s blog on Sunday was very short and to the point.

“It’s not your fault…but it might be your responsibility. That’s a fork in the road on the way to becoming a professional.”

In the last 2 years, I trained over 400 international managers and executives from organisations as diverse as NGOs, engineering manufacturers and global entertainment businesses. What did these people have in common? English is not their first language.

The main challenge international managers face is confidence. Senior managers and executives usually have a confidence based on a total understanding of their local culture, a confidence in their business knowledge & skills and a confidence in being able to communicate perfectly. But when they start working in English that confidence can quickly disappear. They can become hesitant and uncertain. They start becoming concerned about understanding the situation correctly, concerned about whether they can say what they want and concerned about how they appear to their international business colleagues. And while they are worrying about all these communication challenges, they are getting distracted from actually doing business.

I would go further and say that their ability to do business is seriously undermined.

This is a strong statement but let me justify it with a little help from the field of neuroscience. In Nobel Prize winning author Daniel Kahneman’s book “Thinking, Fast and Slow” he talks about two styles of thinking – intuitive, fast and seemingly effortless thinking (system 1) and conscious reasoned thinking that requires effort (system 2). What does this mean in reality? Well look at the following image.

What emotion is this woman showing and is she going to say something nice or unpleasant? As soon as you looked at this picture you knew she was angry and when she speaks it is likely to be something nasty and unpleasant. How did you reach this conclusion? You probably just ‘felt’ it rather than consciously worked through the options and coming to a logical solution. Now look at the following problem:

What is the answer? Well unless you are an extraordinary person, you probably won’t be able to answer instantly. You could work it out with a pen and paper (or a calculator) but it will take some conscious effort.

Do you speak ‘fast’ or ‘slow’ English?

What type of thinking do you use when speaking your native language? Your intuitive, unconscious fast thinking (system 1) of course. Speaking your native language seems effortless. What about speaking English? What type of thinking do you use? A lot of people have to use ‘slow’ thinking (system 2), carefully considering the vocabulary and sentences before speaking. The problem is not just that you think or talk slower. ‘Slow’ thinking requires more effort and this has an impact on your overall ability to think clearly as you become mentally tired. Tired people make poor decisions. So speaking ‘slow’ English impacts your ability to do business.

How can you improve this situation?

The best way to speak ‘fast’ intuitive natural English is to practice using your business English in a real life situation. This is the best way to develop the language skills needed to succeed in business. So instead of going to a language school where you will be drilled in vocabulary and sentence structures, take a business course instead.

The business courses I have developed are the perfect solution to this challenge. Whether you want to develop your leadership skills, improve your negotiation or take a business masterclass covering key strategic business tools, we have courses tailored specifically to help you. Get in touch today to find out more.

Signup to our newsletter